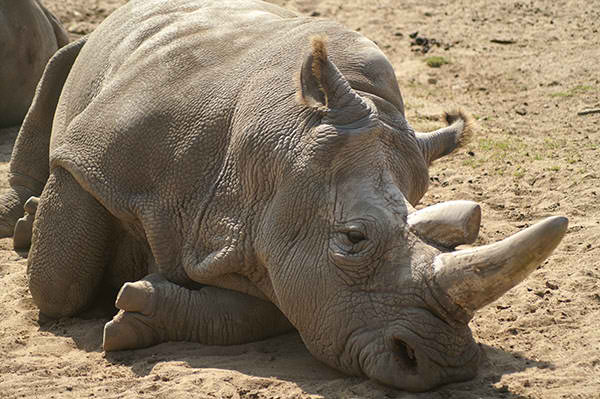 An international project will use IVF and stem-cell technology in an attempt to save the northern white rhino from extinction. Rhinoceros populations in both Asia and Africa have suffered for decades due to habitat loss and poaching, which is spurred mainly by demand for their horns as an ingredient in many traditional Asian medicines (which Western scientists say do not work) (National Geographic, 2015).  Uncontrolled hunting in the colonial era was historically the major factor in the decline of white rhinos. Today, poaching for the illegal trade in their horns is the major threat.

Down to the last three on the planet – Sudan - 45 year-old male, planet’s last male northern white rhino that suffers from low sperm count, Najin – a 26 year-old daughter of Sudan that has leg injuries and incapable of carrying the weight of pregnancy, and Fatu – the daughter of Najin that has uterine disorder which prevents an embryo from being successfully implanted - live in the grasslands of the Ol Pejeta Conservancy in Kenya.

In an attempt to save the species from extinction, a group of scientists from the US, Germany, Italy and Japan was formed and in a few months will try to restore the northern white to its former glory. In October, they plan to remove the last eggs from the two female northern whites and by using advanced reproductive techniques, including stem cell technology and IVF, create embryos that could be carried to term by surrogate southern rhino mothers. This procedure would be a world first.

It is acknowledged that due to the incapability of the three to reproduce, saving the species would not be an easy task and this issue could affect the project’s progress. It would also be difficult to get eggs from female rhinos and it is possible that there is just not enough viable eggs to create embryos in the numbers that the scientists need. If that turns out to be the case, a different approach is needed.  They would use the cells from frozen rhino tissues and reprogram these into stem cells that could be turned into sperm and eggs. Northern white rhino embryos could then be created from these. Effectively, the species would be resurrected by taking skin cells from dead animals in order to create fully viable embryos. It will be an incredibly tricky procedure.

Scientists have created stem cells – known as induced pluripotent stem cells – from rhino skin cells. However, they have not taken the final step and turned them into sperm and eggs, and no one knows how difficult that might be. Nevertheless, the group is confident that they will learn how to do the process in the end and accepted the fact that perfecting these methods for saving the northern white rhinos could help other species (The Guardian, 2016).

There is no easy answer regarding the white rhino since it now functionally extinct. The best lesson we can learn from this is to never let this happen again with any other species (The Guardian, 2016).

McKie, Robie (May 15 2016). Down to the last three: can science save northern white rhino from extinction? Retrieved July 13, 2016 from https://www.theguardian.com/environment/2016/may/14/northern-white-rhino-bid-to-save-extinction-threat